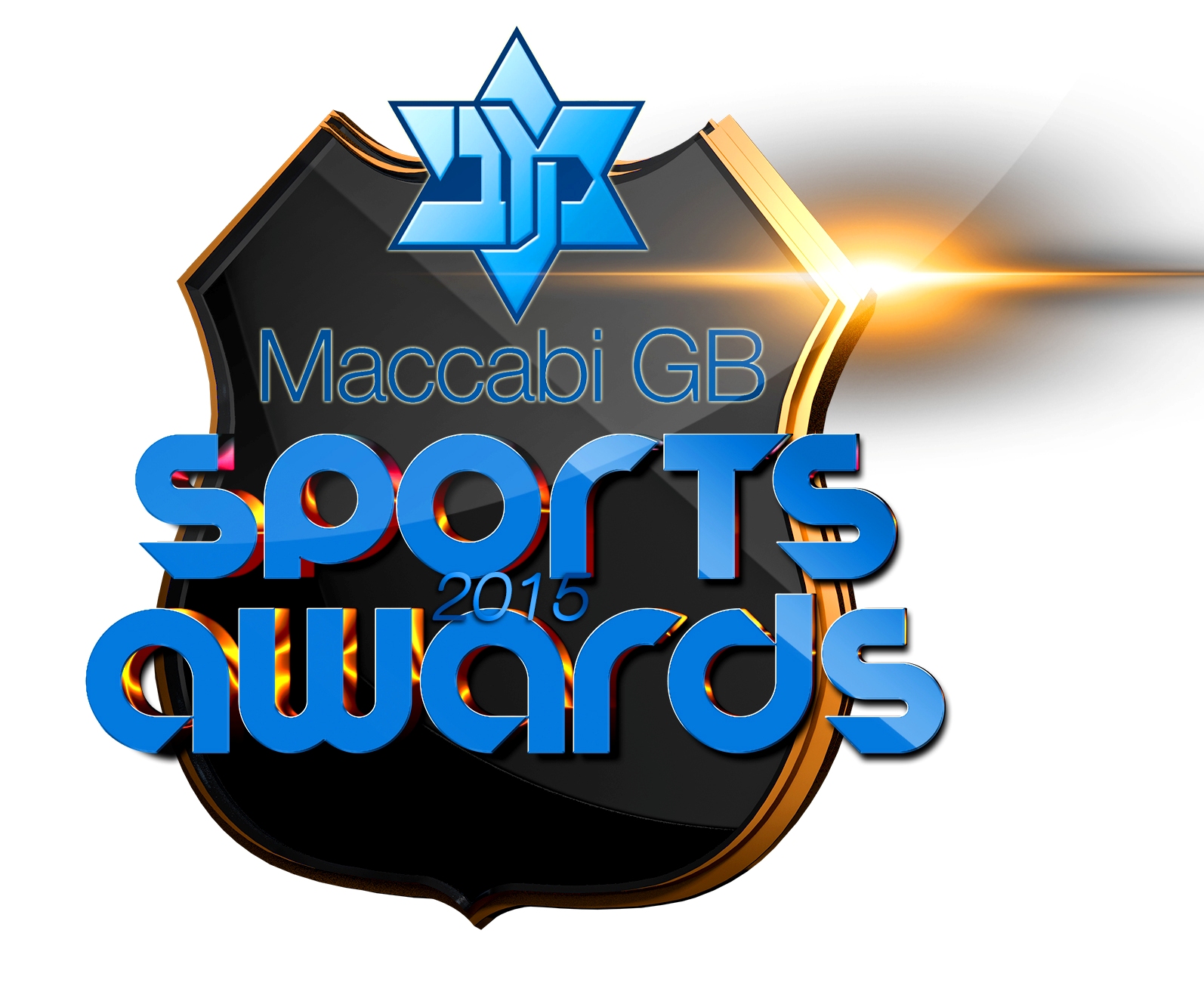 Futsal player, Russell Goldstein, Trampolinist, Josh Newman and the Team Maccabi GB Open Futsal Squad picked up three of the major accolades between them as the winners of the Maccabi GB Sports Awards 2015, sponsored by the Pierre Gildesgame Memorial Fund and in partnership with UJIA and the Jewish Chronicle (JC), were officially announced this week. Goldstein was a double-winner, receiving two of the aforementioned awards, as he was also part of Team Maccabi GB’s Gold-winning European Maccabi Games 2015 (EMG2015) Open Futsal side who took home this year’s trophy recognising an athlete or team’s achievements at the Games. 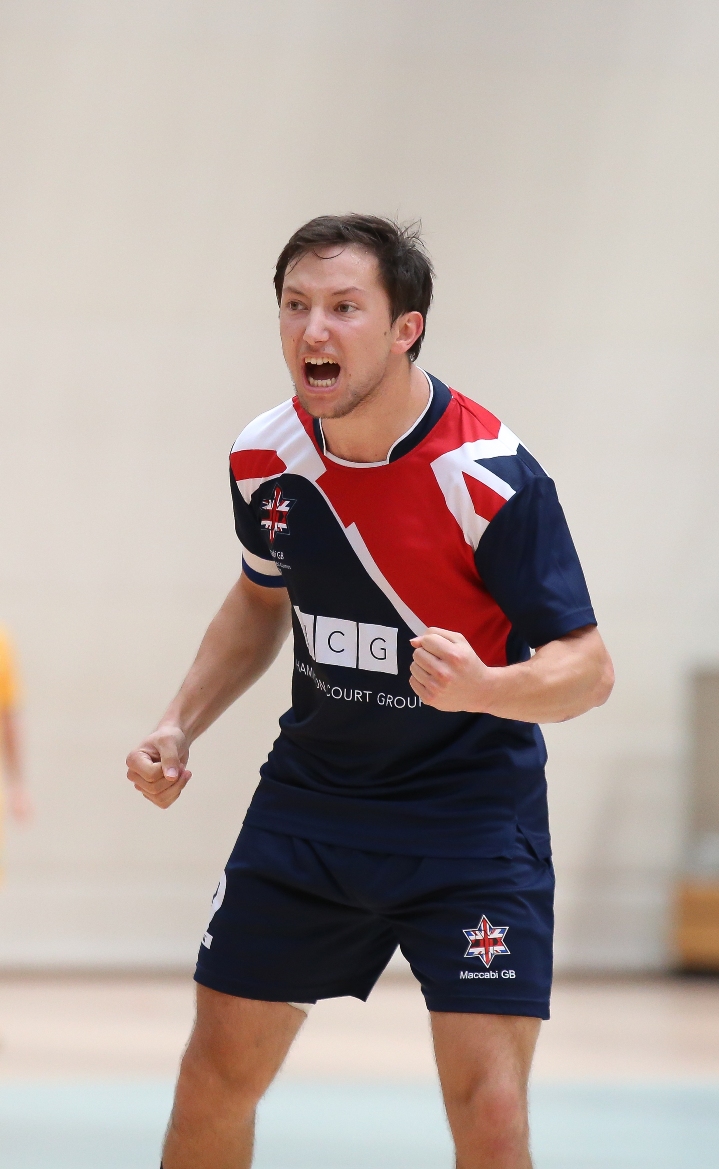 Goldstein, who wins the new Susan Halter Elite Athlete Award for the first time, was recognised by the judging panel following a 2015 where he won his first full England cap, scoring on his debut against Andorra, and establishing himself as a regular in the National Side. Having worked tirelessly over the past four years to play Futsal at an elite level, Russell is now part of the first ever England squad to compete in a Futsal World Cup Qualifying Competition Proper. What makes this landmark even more special is that, having played for Team MGB at the Maccabiah Games in 2013, Goldstein got to reignite his Jewish-journey as the Competition was staged in Israel in October, where England beat Wales, Denmark and the host nation to qualify for the next round. 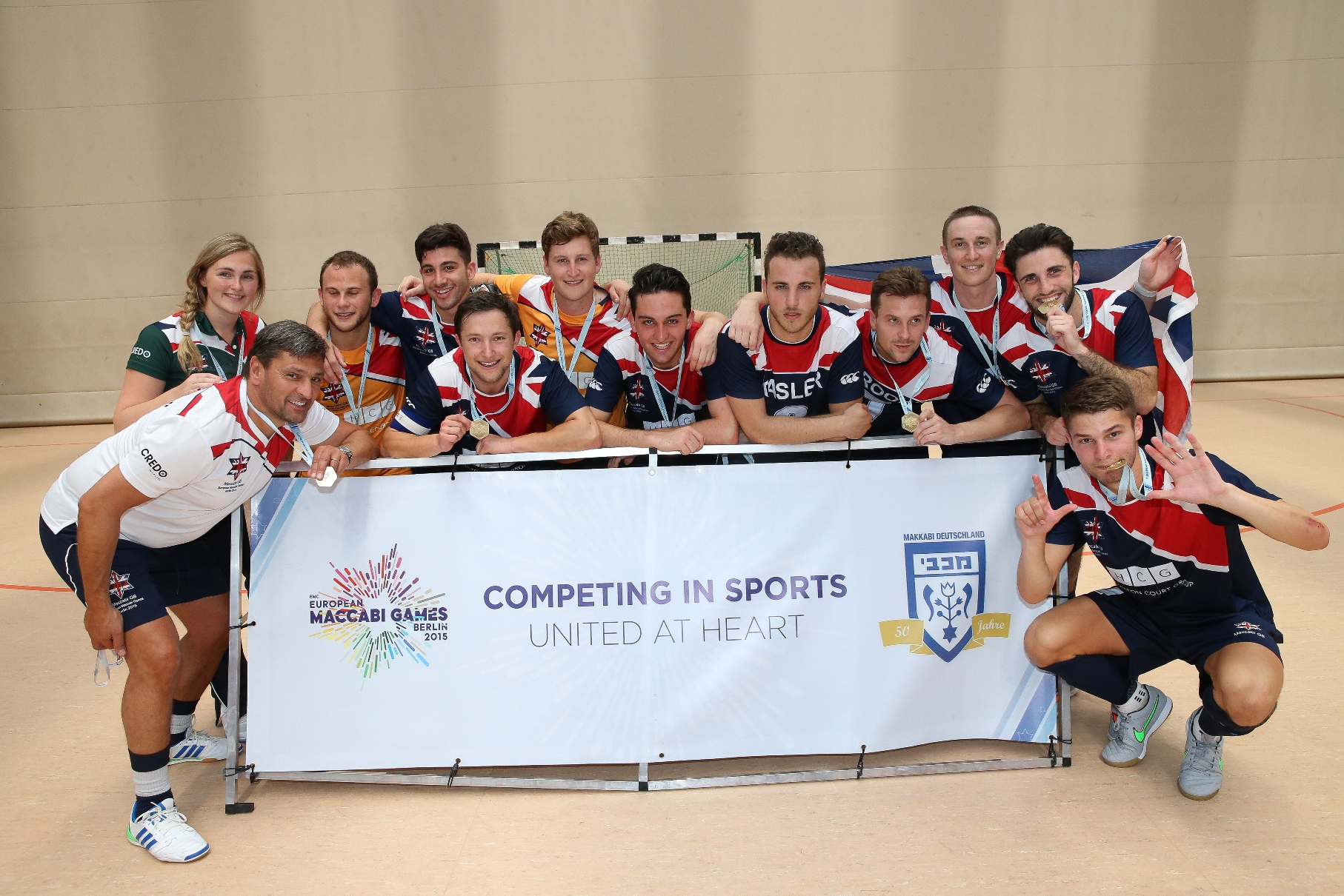 If that win was not enough, the Loughborough Futsal star captained the Great Britain Open Futsal Team to Gold at the European Maccabi Games 2015 in Berlin this summer. The side, Managed by Andy Landesberg, faced a tough road to the Final, overcoming the likes of South Africa, Spain and Turkey before coming up against heavy favourites Maccabi Australia in the Final. Despite being 2-1 behind, Russell helped rally the team who eventually won 4-2 to take home Maccabi GB’s first ever Open Futsal Gold from a Jewish International Sports Competition. It is fully understandable why the side won the UJIA European Maccabi Games Award, although the whole of Team Maccabi GB’s Delegation, who won a record-breaking 91 medals in Berlin, deserves a mention. 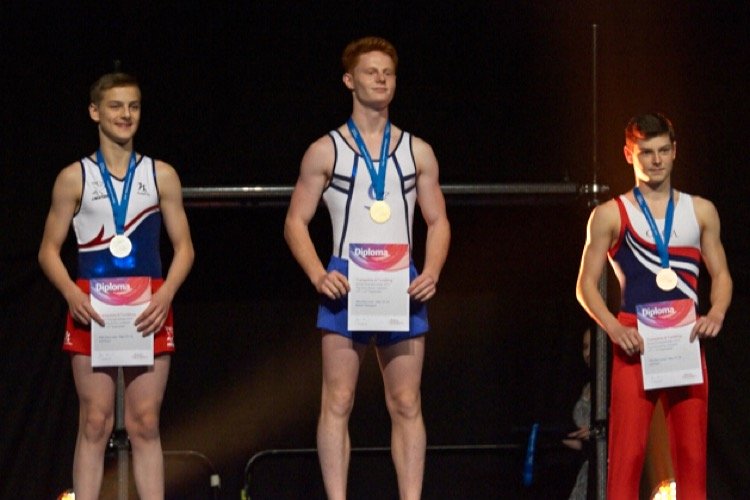 Trampolinist, Joshua Newman, won the John Dymant Award for Top Athlete at a National Level, capping a remarkable year where he remained undefeated in all competitions, won three National Gold medals and made the Final of his age group at the Elite Super League Final at the Copperbox Arena in the Queen Elizabeth Olympic Park. The young athlete – part of the Great Britain Team - has been so impressive at Junior Level he has decided to pass on this year’s World Age Games to concentrate on his new routines for the senior events next year with his main goal to medal at the 2020 Tokyo Olympics. 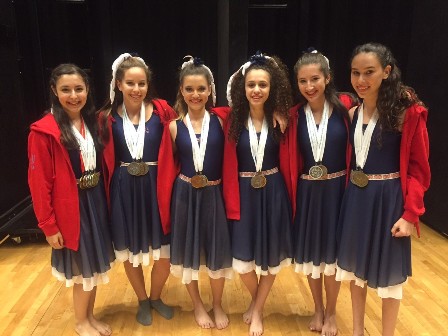 As with the award for Team GB’s European Maccabi Games 2015 Squad, the Sam Bulka JCC Maccabi Games Award is awarded to Great Britain’s stand-out team or athlete from the annual Games in America – this year held in Fort Lauderdale, Florida. In an incredibly-tough category, Hannah Grunwerg makes history as the first Dancer to ever win this accolade. The Sheffield athlete has been an outstanding member of Great Britain’s JCC Maccabi Games Squad for the last four years. However, it was this year where her exploits really shone through and earned her the prestigious award. Hannah won one Gold (Tap), three Silver (Open, Choreography & Israeli) and a Bronze (Ballet) medal. In addition, she was also awarded a special ‘Midot Medal’ for her care and attention to all the other dancers. This brought her total medal haul to an astounding 24 since she first competed in 2012. 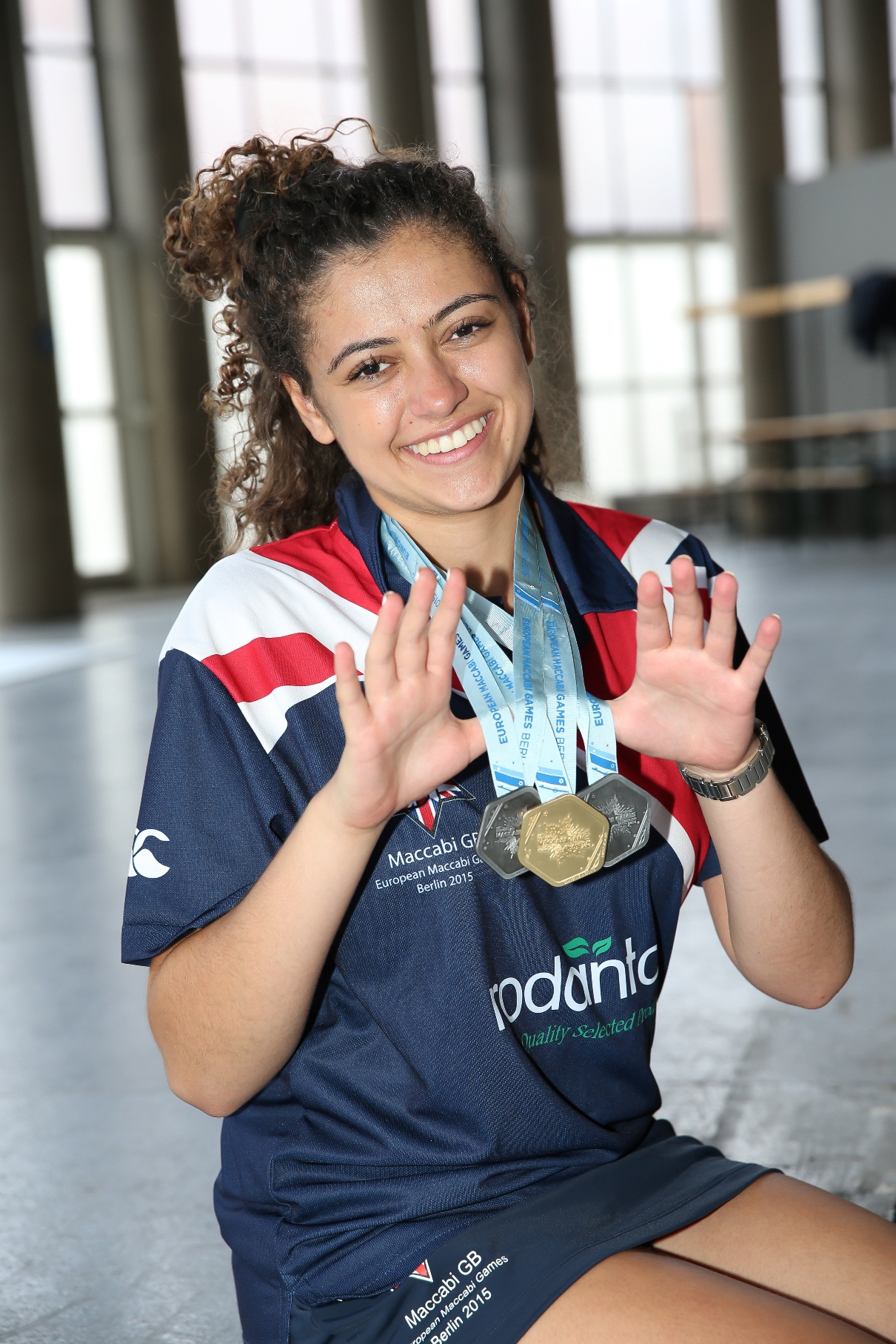 A new award for this year is The Ken Gradon Rachmanus Award, bestowed upon the individual who has shown outstanding sportsmanship and fair play in a sporting arena. This year the person who was presented with the prize was Aimee Shulton. There were a number of nominations, however Aimee showed great leadership with Team MGB’s Junior Badminton Squad at the EMG2015.  As well as winning three medals herself, Aimee coached the Junior athletes and acted as a mentor to them throughout the Games. She also assisted with other sports squads which helped bring a wonderful team spirit to the entire Delegation. 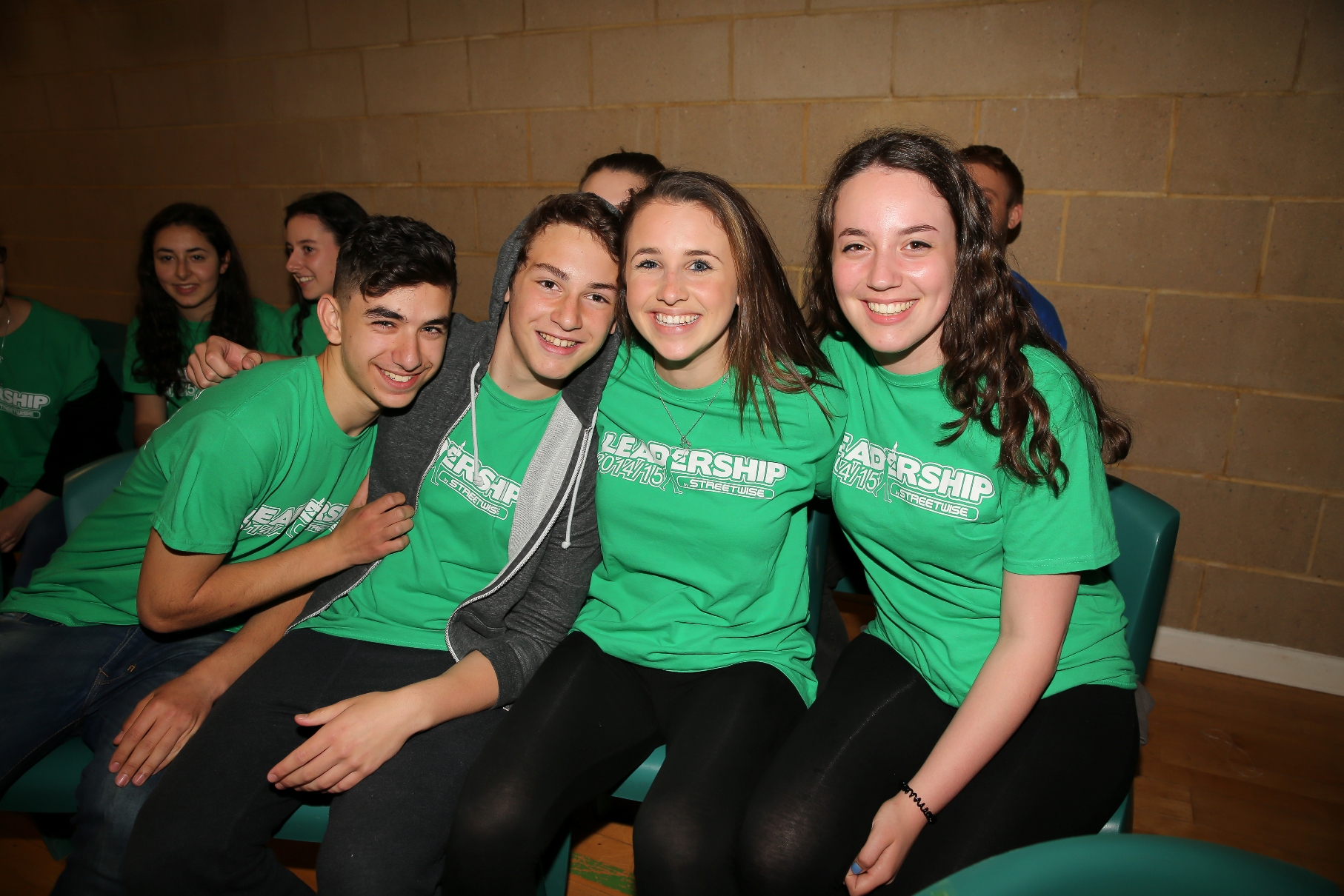 The CST Young Sports Leader Award was won by Natasha Cowan. The Award recognises the standout participant of the ‘Leadership by Streetwise’ Programme which trains young, communal sports leaders. Natasha, who is now in her third year of the Programme has become an integral part of the course. Highly commended by her Bogrim (graduates of the programme) and those who run ‘Leadership’ she is always willing to better herself and help others, volunteering in an instant and completing every task with a smile on her face. 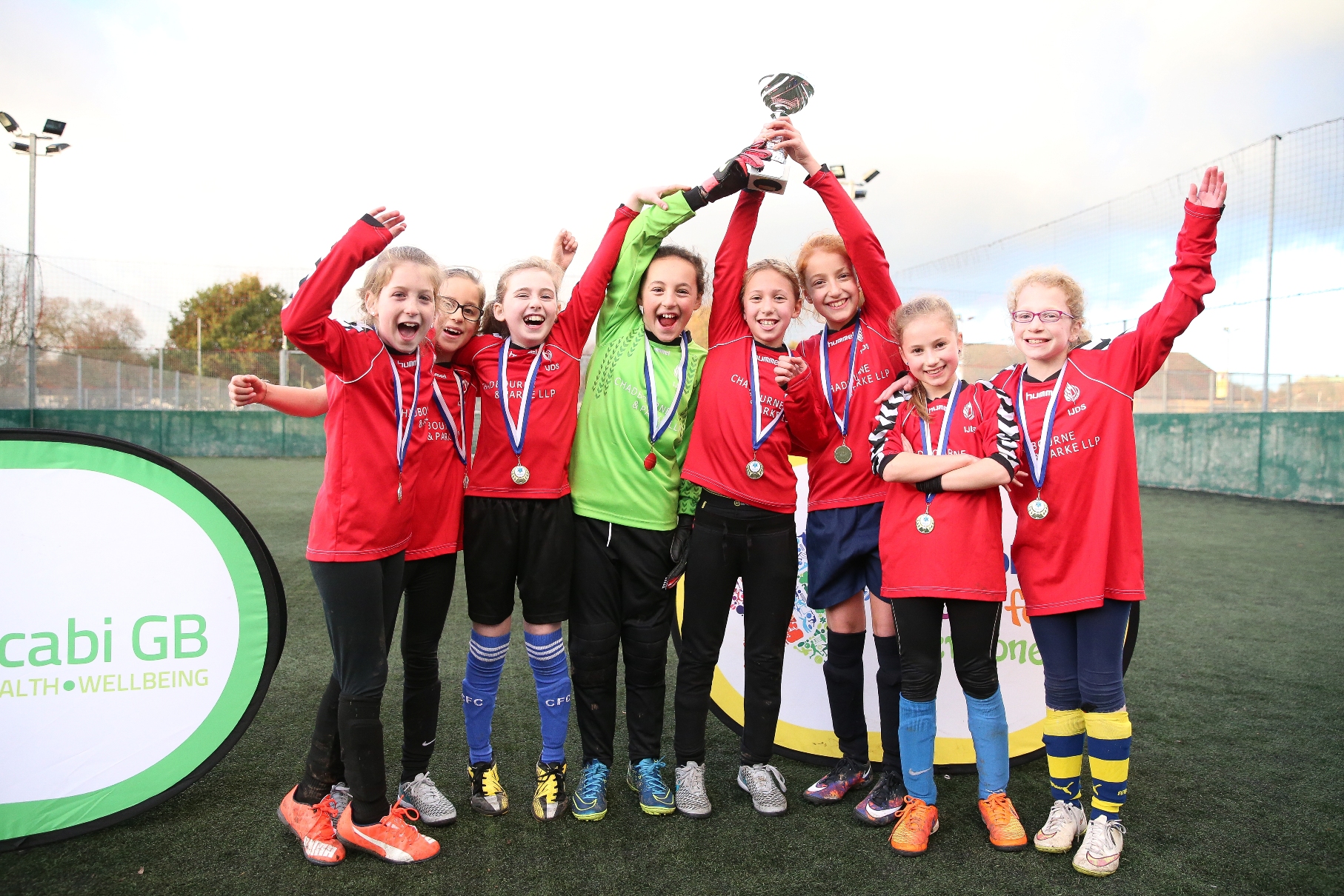 Another debut prize for 2015 was presented to Independent Jewish Day School who won the Jewish Chronicle School Sports of the Year Award. The Hendon-based School was recognised for their performances in numerous Maccabi GB and Jewish Chronicle School Sports Tournaments as well as their commitment to, and improvement in, Jewish sport throughout the last twelve months via their participation in the Maccabi GB PE Curriculum Lessons Programme. 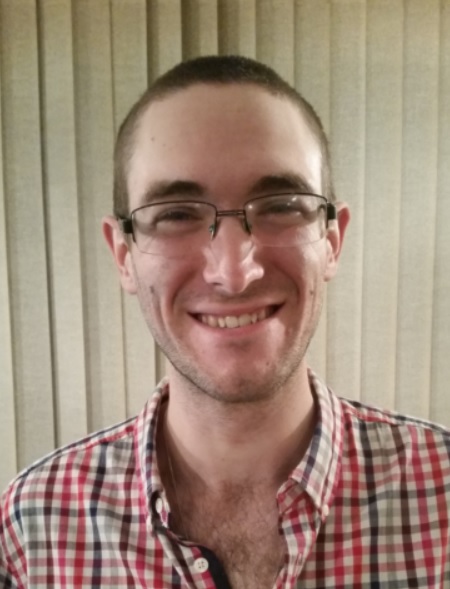 The Fred Worms Outstanding Volunteer Award was presented to Elliott Thorne. The younger son of Maccabi GB Junior Football League (MGBJFL) Chairman, Laurence, Elliott dedicates as much time to the League on as his dad does, aiding in the running of the competition – of which over 500 young, Jewish players participate in every week – whilst also reporting on the day’s action. Additionally, he has volunteered at numerous Peter Morrison Cup Finals across the UK and other Jewish footballing events. Elliott selflessly throws himself into the role and shows true commitment and passion to Jewish football at grassroots level. 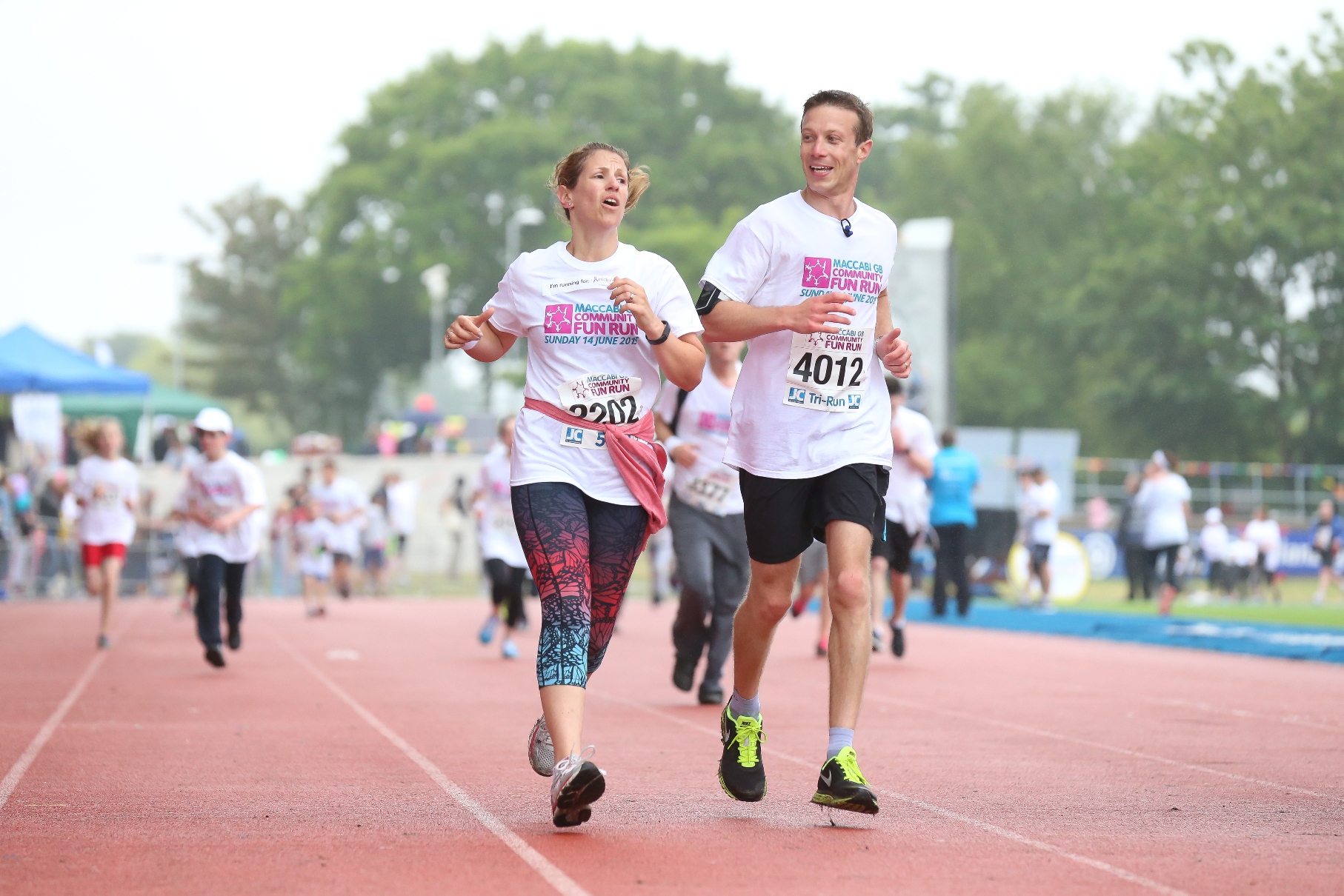 Following the overwhelming success of the Maccabi GB Community Fun Run in June, the brand new Maccabi GB Community Fun Run Award was created to give to a Charity or individual that went above and beyond to raise funds, awareness or inspire at this year’s event. The judging panel took an age to decide on an eventual winner – such was the number of potential candidates. They eventually decided to recognise the achievements of communal charity, Nicki’s Smile. Despite being one of the smallest charities (in terms of personnel) to enter the event, Nicki’s Smile were the standout organisation in terms of their incredible ‘can-do attitude’ and tireless application; bringing a number of new participants to the largest sporting fundraiser in the Community and raising both awareness and funds to help make the day a record-breaker. 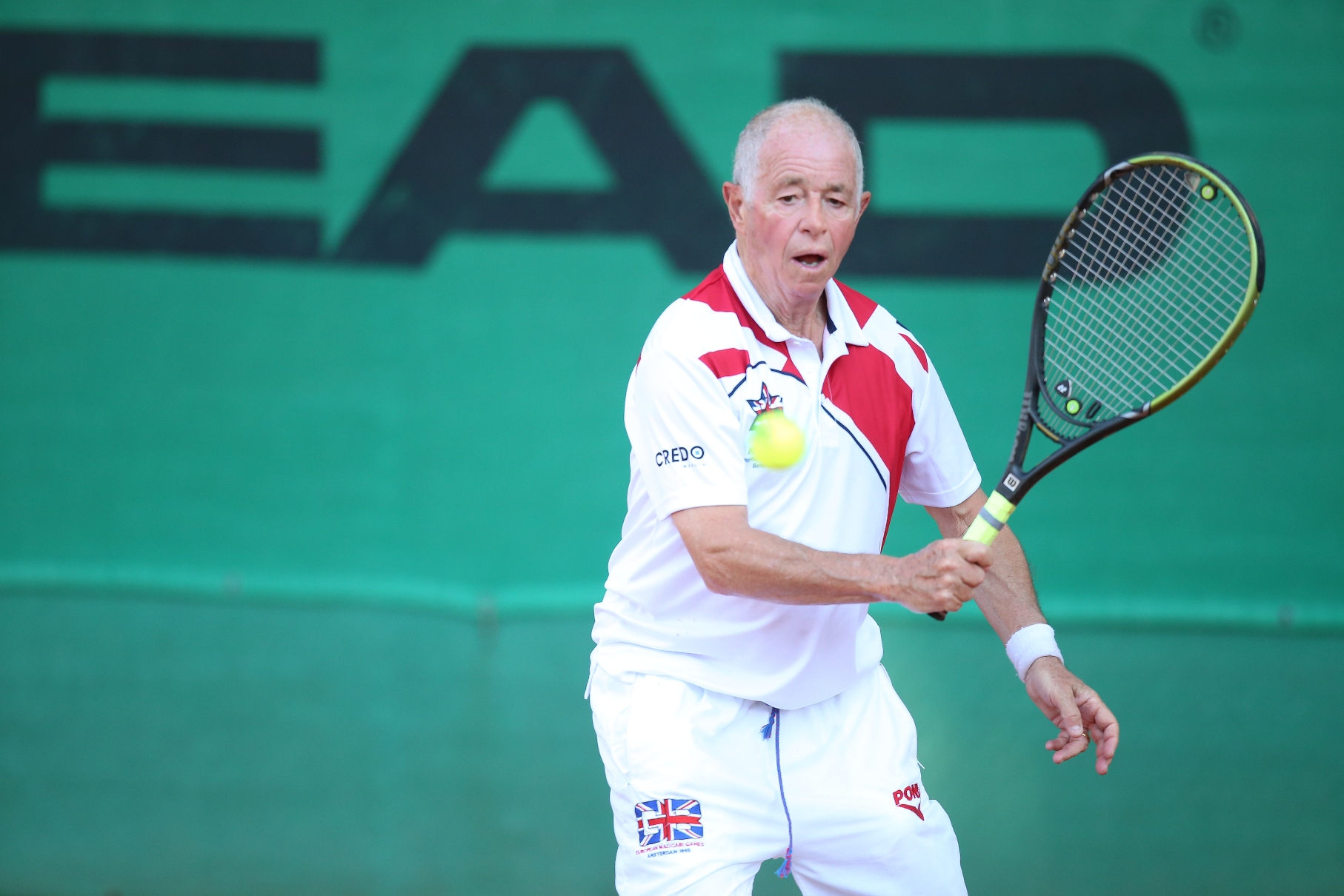 The final, prestigious accolade for 2015 was awarded to John Barnett who won the Richard Urban Lifetime Achievement Award. John has been a permanent feature in Jewish sport for over 60 years. Having played five sports under the Maccabi Movement’s banner, he began with cricket in 1955, playing for AJY Cricket Team as Wicket Keeper and also for the Chartered Surveyors’ team in 1964. He played competitive Table Tennis and, in 1957, captained the Borough of Hendon Table Tennis Team in the London Borough Championships where he beat England Under 18’s David Offenbach in the Final. From 1964-1977 he regularly played football for Highgate in AJY League then MAL in the Maccabi league. He won the Cyril Anekstien Cup, represented the Maccabi League Rep Team and once scored 10 goals in a 21-0 victory. Switching sports again and in the 1970s John played squash for the AJY Team in the Maccabi League and won the Handicap Tournament at Finchley Manor Club. It was in tennis where John really excelled. He was selected for Over 55’s Herts County Tennis Team then regularly played and captained the County at all age levels until Over 75’s, winning regular Herts Veterans Singles and Doubles Titles along the way. In 2014 he played in the British Veterans Tennis Tournament, winning the Doubles at Wimbledon and beating both the No. 1 seeds and World Champions along the way. His international CV is just as impressive having represented Team GB at the Maccabiah Games in 1993, 1997 and 2001 and the European Maccabi Games in 1991, 1995 and, most-recently, 2015 in Berlin at the age of 76. He has been the Team GB’s Head of Tennis (Maccabiah Games 1993), Chairman of Organising Committee (1997 EMG), Head of Delegation (1999 EMG) and Joint-Chairman of the 2001 Maccabiah Games, ensuring the event went ahead despite fears over the Intifada. To this day John is ranked No.4 in the UK at Singles Tennis and still plays Table Tennis in the Watford League with his son and Grandson.

Speaking about the Maccabi GB Sports Awards 2015 the organisation’s Chair, David Pinnick, said, “The Maccabi GB Sports Awards is one of the highlights of the Jewish Community’s sporting calendar. To recognise the talent, commitment, dedication and achievements of all those involved in Jewish sport over the past year is incredibly important and Maccabi GB is proud to host this event. We are dedicated to growing and nurturing Jewish sport from grassroots to elite level and these Awards are a culmination of many years of hard work and commitment by the organisation, Jewish sportspeople and their managers, coaches, families and friends.

“We would like to thank everyone who nominated the athletes and teams, a ‘thank you’ to the judging panel – who had a tough task picking the winners and an enormous ‘Mazel Tov’ to all the winners. We are also grateful to all our supporters and donors to this event, including the Pierre Gildesgame Memorial Fund, UJIA and the JC.”

Following a year of incredible sporting achievements - including 2 major international, Jewish Sports Competitions - we are excited to announce this year's winners