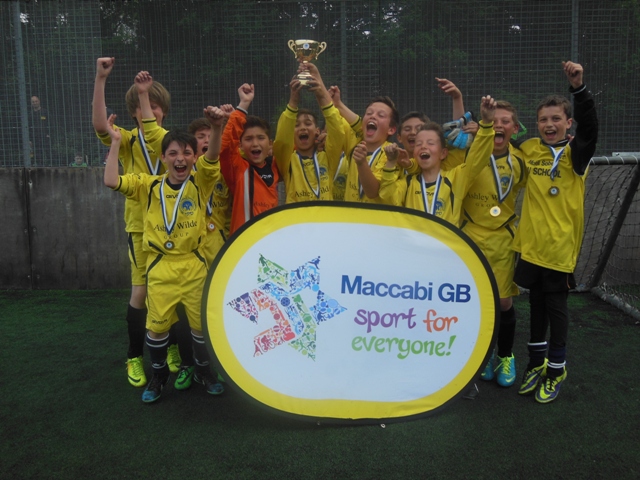 The latest Maccabi GB School Sports Tournament ended in success for Sinai, as they triumphed against 26 other teams to win the Primary Schools Years 5 & 6 Boys Football Tournament on Wednesday.

The event, at Mill Hill PowerLeague, welcomed 12 schools, who brought 27 teams to play between them. In total, over 250 young people were engaged.

The tournament saw teams split into six groups and play each other in a league format with the top team in each group qualifying for the Knock-Out stages. The group games brought a competitive edge to the competition, with the latter stages of the tournament producing some exciting attacking displays from the players on show.

The Semi-Finals were both close games, with Sinai beating Akiva by just the one goal to reach the final, while Clore Shalom earned their place in the final by beating MMK on penalties after the game ended in a goalless draw.

The Final was a close affair with both sides playing fast-paced, high-quality football. Sinai had the better of the chances on the Clore goal, with the Clore keeper pulling off a string of saves to keep his side in it. When he was finally beaten the post came to his rescue as the ball rolled agonisingly along the goal line before he gratefully scooped it back into his hands. Eventually, the Sinai pressure paid off and a well-worked passage of play ended up with a stinging strike into the bottom corner of the net. Sinai were able to keep control of the ball for the final few minutes to win the match and be crowned tournament champions.

The afternoon concluded with the medals presentation and the trophy was awarded to the winning Sinai team.

Maccabi GB’s School and Sports Coordinator, Alex Elf, spoke about the tournament; “It is wonderful to be able to engage over 250 young people in the event this afternoon, the young players have enjoyed playing in a supportive environment and everyone has left with a smile on their face having had a great afternoon”.