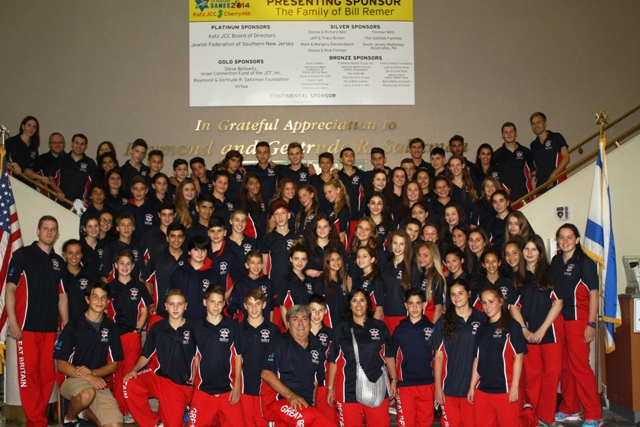 Maccabi GB, in partnership with UJIA and the JC, is proud to officially announce the athletes who will be competing on behalf of Team Maccabi GB at this summer’s JCC Maccabi Games in Fort Lauderdale, Florida. The JCC Games, from 6th-17th August 2014, are a chance for young athletes under the age of 16 to represent their country in America in a sporting environment, whilst experiencing social and cultural programmes with other young Jewish people from around the world.

The full Team Maccabi GB squad will consist of 65 athletes – 50 who will be representing British Jewry for the very first time – as well as an 11-person Management Team. They will be overseen by Heads of Delegation, Helena and Brian Green, and assisted by Janice and Ian Aarons. For many of the representatives it will be a chance to announce themselves to the Jewish sporting world as potential future European Maccabi Games and Maccabiah stars.

The announcement comes just a few months after the Management Team was confirmed.

The full list of Squads and athletes can be found below:

This summer’s JCC Maccabi Games will see over 1200 young, Jewish athletes from around 40 different delegations descend on Florida.

Speaking about the selection Boys U14 Football Manager, Liam Stein, said, “It is an incredible experience to represent Team Maccabi GB at a JCC Maccabi Games. Each host city does a fantastic job putting on a great games and I'm sure Fort Lauderdale will be no different.   We have an extremely talented squad who have already begun preparations for August. The athletes can expect intense competition mixed with plenty of exciting events with their host families and other young, Jewish participants from around the world.

“The unique element of the JCC Maccabi Games is the kindness the hosts show in welcoming our athletes into their homes and ensure they have as much fun as possible during the trip. I know our Delegation will have an incredible time and do British Jewry proud.”