30,000 Yellow Candles were lit on Wednesday night on the eve of Yom HaShoah – the annual Jewish remembrance day for victims of the Holocaust. The unique, informal education tool managed by Maccabi GB, enabled members of the community and beyond to remember those who lost their lives in the Shoah.

People across the UK and beyond took part in the initiative by posting a photo of their lit Yellow Candle on social media using the #yellowcandle and tagging the page Yellow Candle UK.  Yellow Candles were also lit by leading figures in politics, sport and entertainment including Prime Minister Theresa May, Leader of the Opposition Jeremy Corbyn, Home Secretary Sajid Javid, Minister for Faith Lord Bourne, Luciana Berger MP, Rabbi Lord Jonathan Sacks, Lord Alan Sugar, Ambassador of Israel Mark Regev, Matt Lucas, Martin Lewis, and Stacey Solomon all posted pictures on their social media accounts which was seen by millions of people.

A fundraising campaign was launched to fund the project which was generously supported by the Betty Messenger Charitable Foundation, the Charles Wolfson Charitable Trust and through a successful “text to give” initiative, as well as private donations.

The candles, which come with the name, age, date and place of death of a victim of the Holocaust, were distributed to 30,000 people via over 150 cross-communal organisations including 18 schools.

Paul Harris, Yellow Candle Committee member said “Two years ago when the Yellow Candle Project was launched in the UK, 3,000 yellow candles were lit on Yom HaShoah in memory of Holocaust victims. This year through working with Maccabi GB who have delivered the project together with our committed team of volunteers, 30,000 candles were lit. Each candle represents a different life and story. A simple but incredibly powerful way to remember the individuals who perished in the Holocaust. The Jewish community and beyond have embraced this poignant memorial and I am proud to have been involved "

Minister for Faith, Lord Bourne said of lighting his Yellow Candle: “It is an honour to take part in the Yellow Candle Project as the Jewish community leads all of us in remembering the Holocaust. Each lit candle serves as a sombre reminder of the people who were murdered during history’s darkest chapter. For me, this meant lighting a candle in memory of Similie Rosen, who was murdered by the Nazis at just two years old. That one so young should be deprived of her life for a belief system so distorted and disturbed is deeply sobering. These acts carry forward the memory and legacy of the victims of the Holocaust. Let us never forget.”

Maccabi GB CEO, Martin Berliner said, “ On the eve of Yom Hashoah over 10,000 tweets were sent on #yellowcandle and it was the number 4 trending topic across the UK during the evening. Thousands posted their photos across social media and told the stories of those that were so cruelly taken from us all. In our difficult times where intolerance is on the rise, it was quite something to see people from across the political and religious spectrum, every walk of life, children and adults, coming together over Yellow Candle even if it was only for a moment, it shows it can be done.  The Yellow Candle Project is a modern way to ensure that not only do we remember the horror of the Shoah as a whole, but it is also important that we remember the individuals that make up the 6 million murdered.

We plan to scale the project with the aim of having over 100,000 candles in distribution in 2021 subject to funding and donations. Everyone at Maccabi GB is proud to see the impact this project has had, not only on our community, but the wider population.

Watching the posts come in every couple of seconds on Wednesday night was incredibly powerful to witness.  This simple tool enabling the country to come together to ensure we never forget.”

On Facebook, Rabbi Lee Wax shared her unique story, “Tonight we lit candles in memory of our families: Launder, Bards, Lions, Waxes, Sugarbreads, Woolfsons, Jacobs’s – murdered in the Holocaust along with 6 million Jews. By extraordinary coincidence, my card from the #yellowcandle project was for Haim Wax aged 8 when murdered in Auschwitz. That was unbelievable enough. But there’s a 2nd coincidence: his mother’s name was Lea, also murdered 1944 in Auschwitz (probably together). And I can barely write that there is also a 3rd coincidence: Lea’s mothers name was Cirel (pronounced almost as my father’s name, Cyril). Zichronam Livracha, may we all work against hatred and racism in the world so that their memories may be for a blessing.”

@jemma_levene on twitter said “Three generations of our family have lit a memorial candle this evening, each remembering a child who LIVED in Europe, before perishing in the Holocaust.” and @icap33 wrote “On Yom Hashoah my kids have lit a #YellowCandle for two children, their age, who were murdered in the Holocaust.” 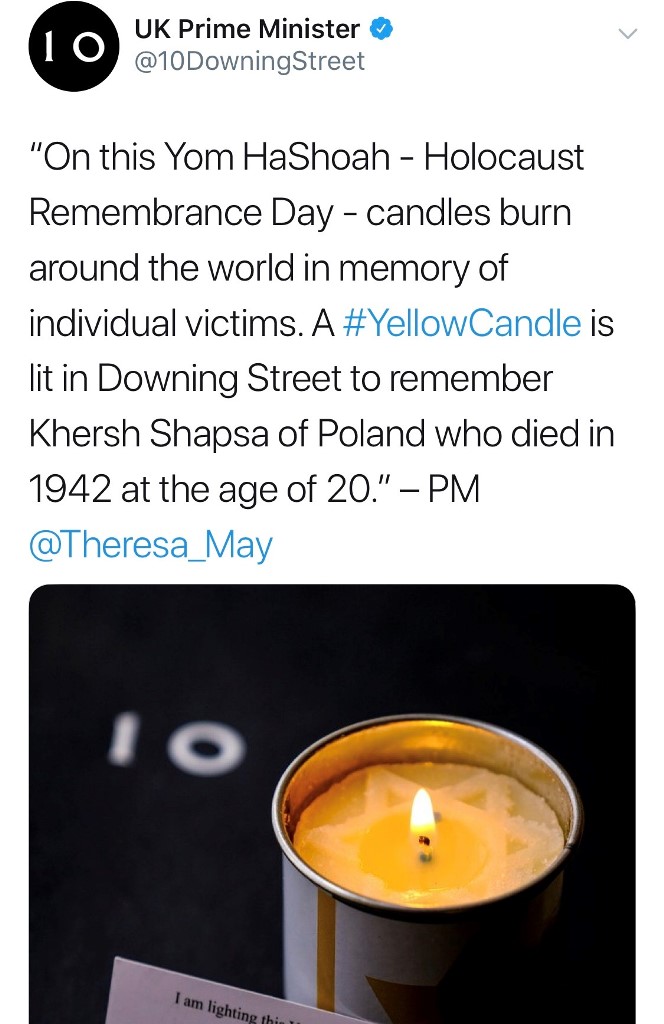 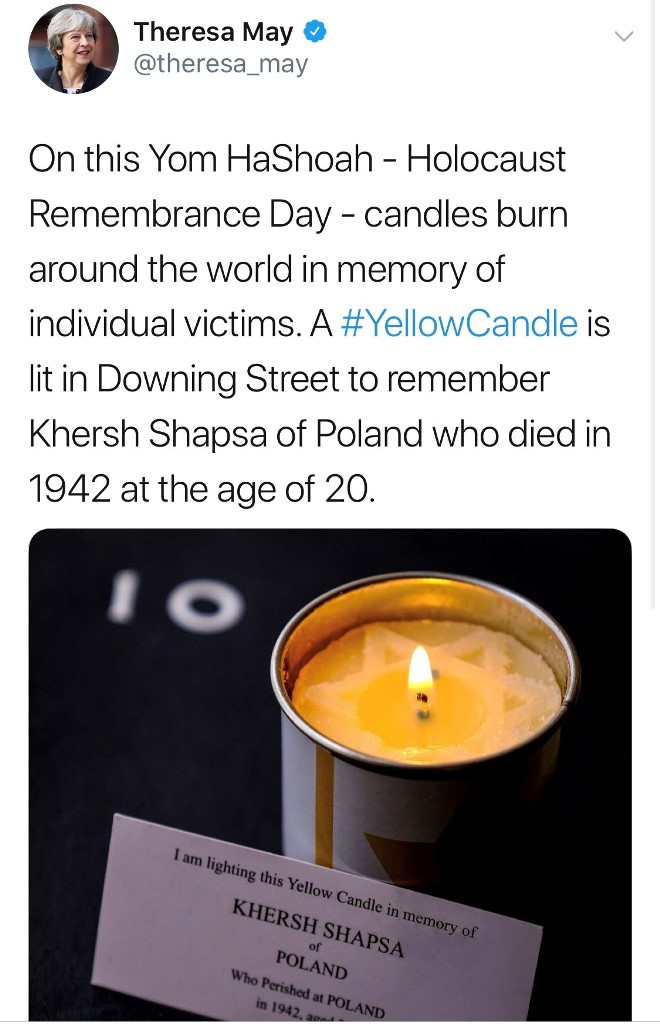 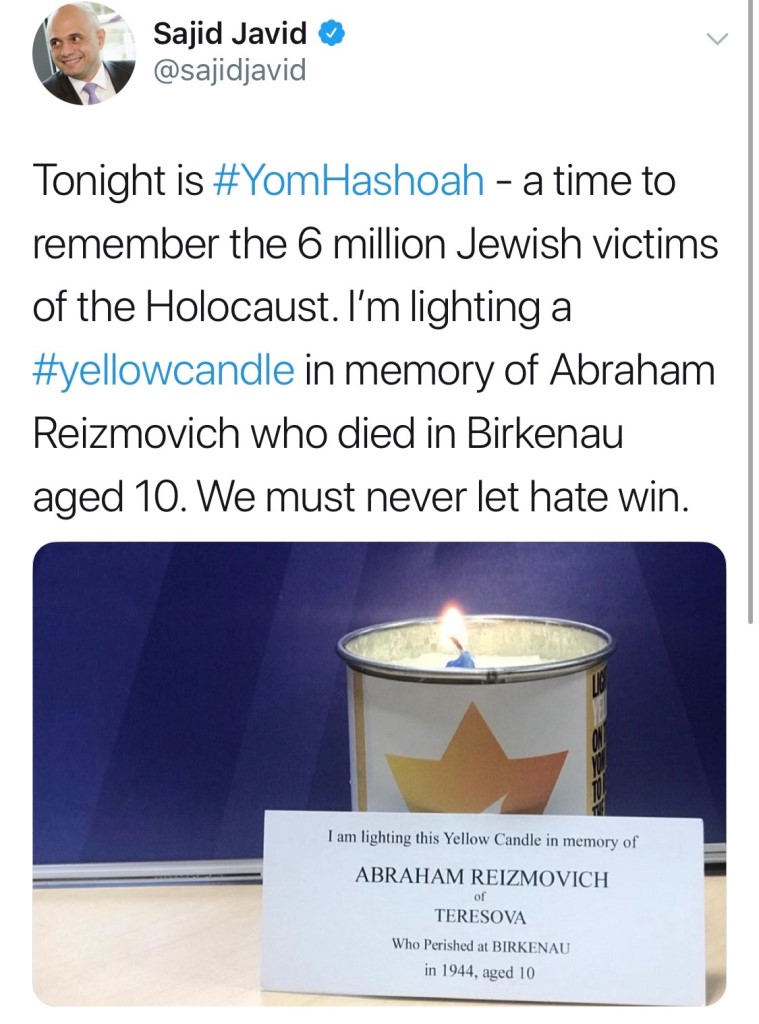 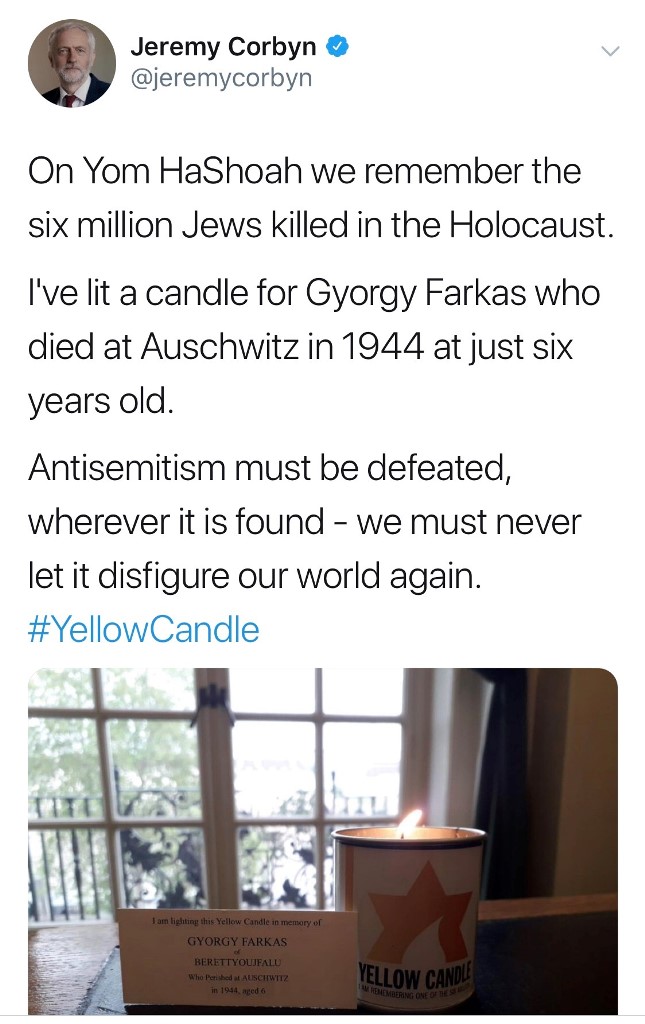 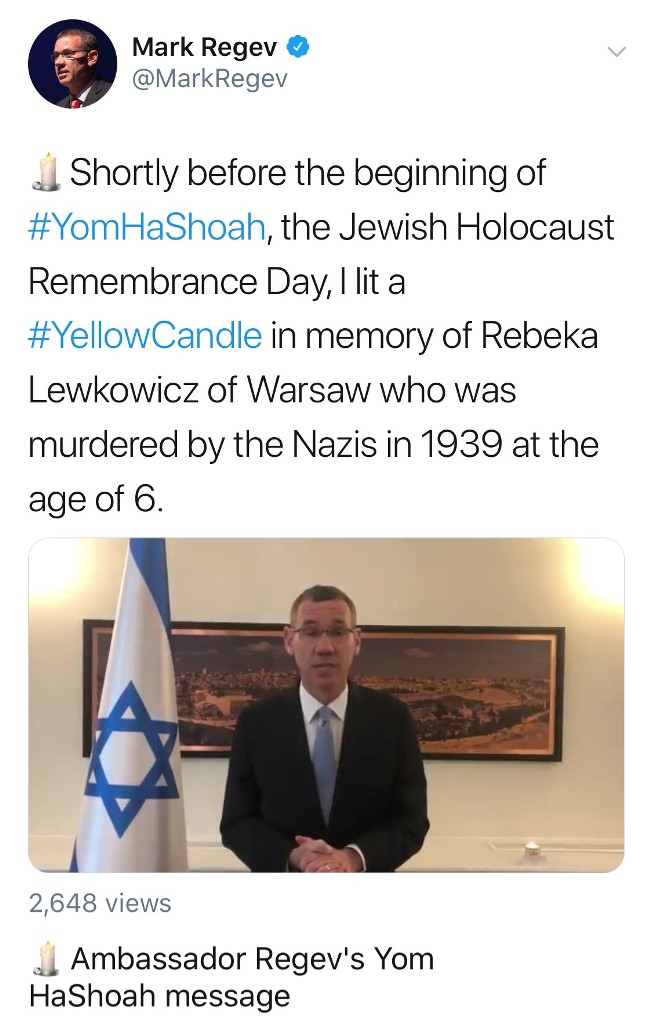 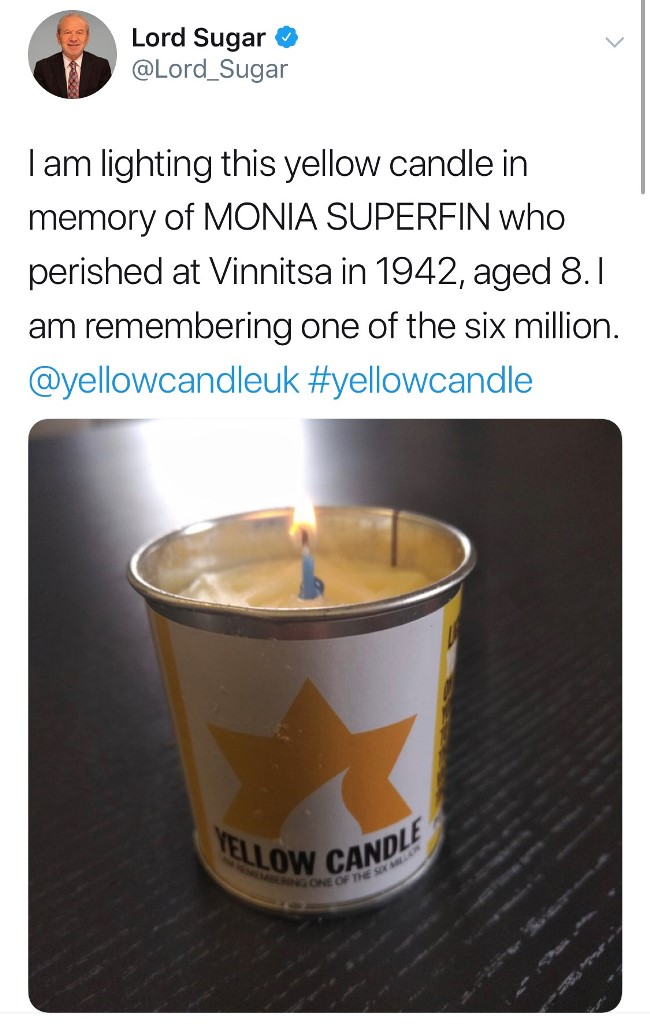 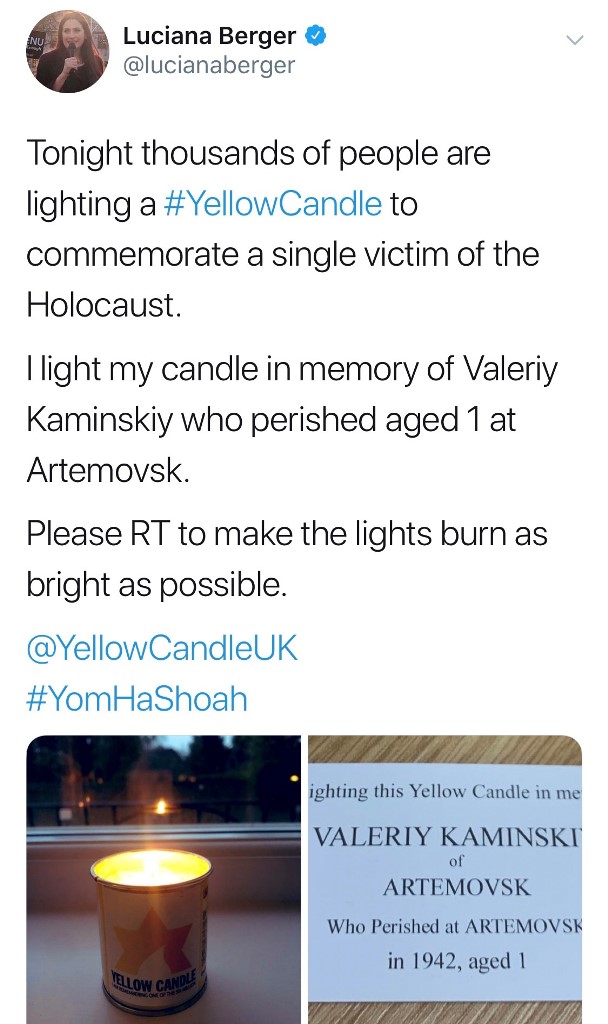 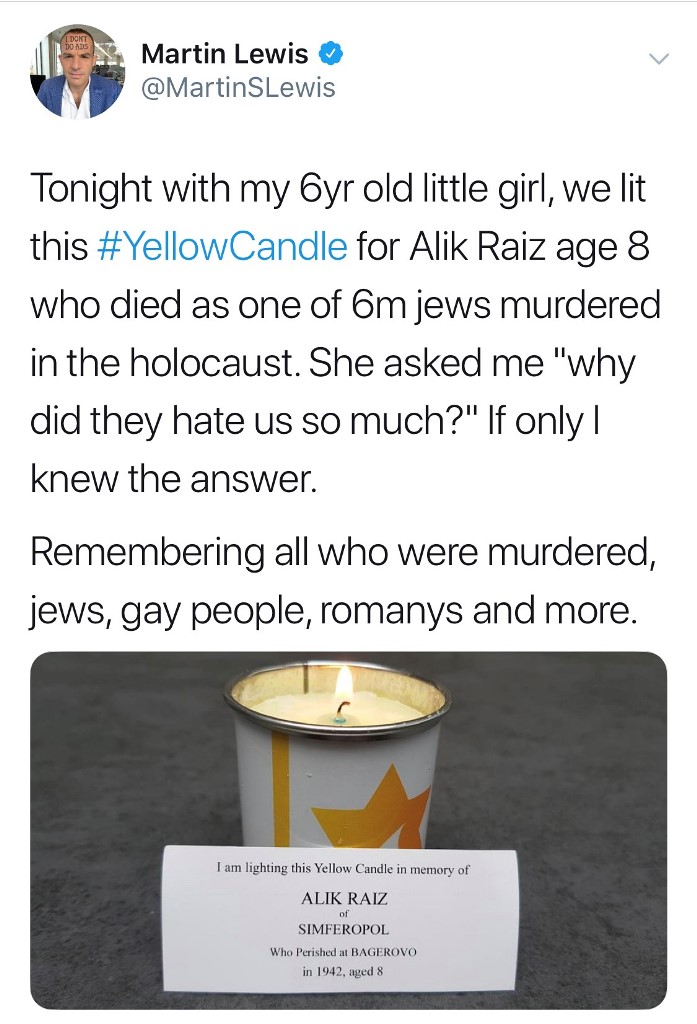 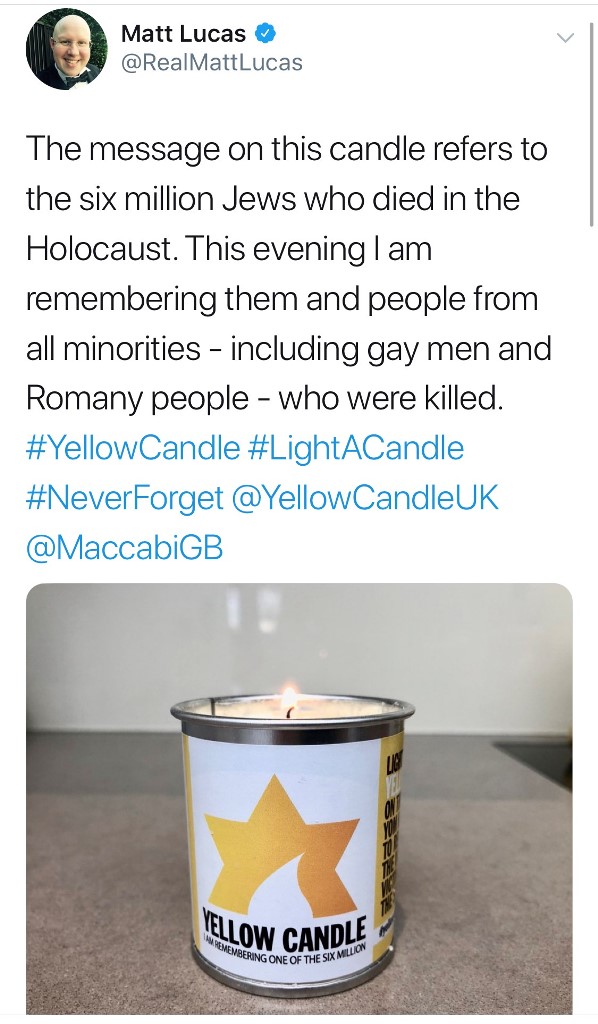 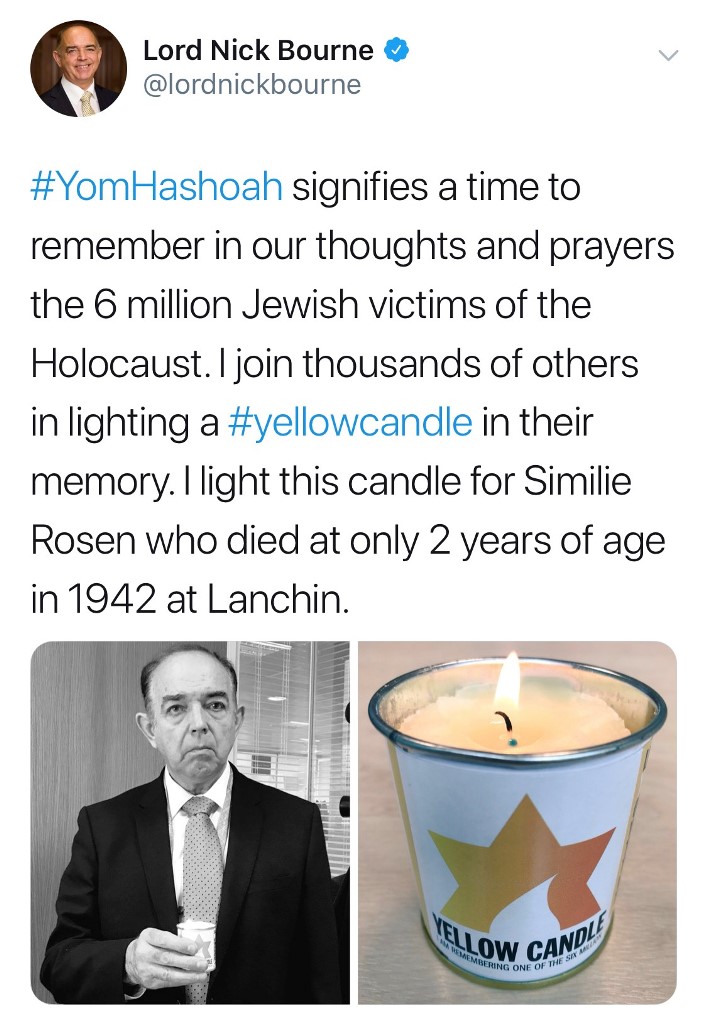 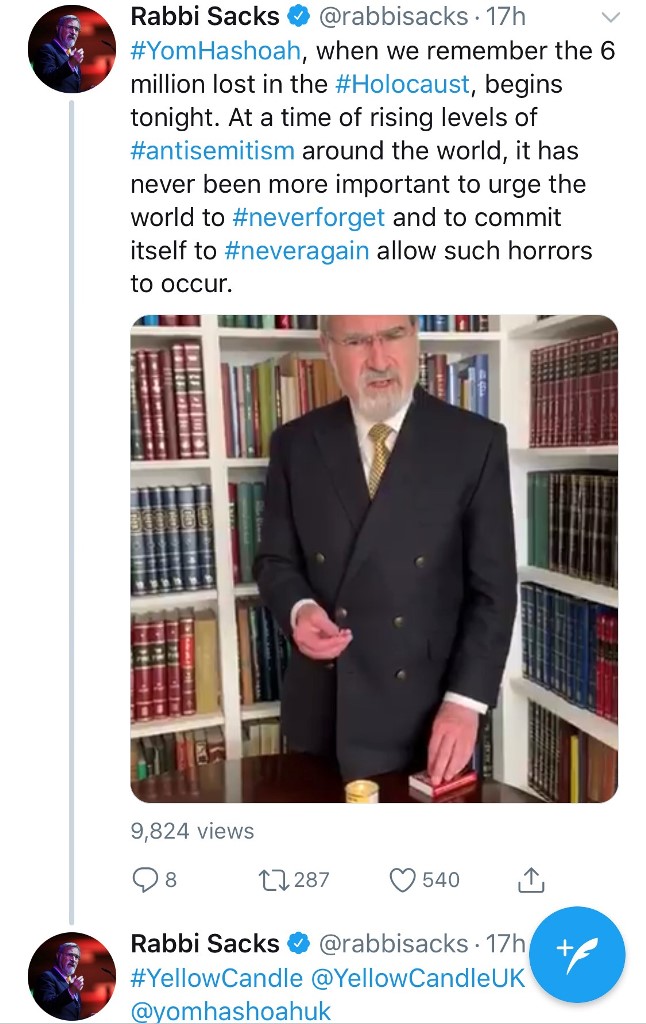 30,000 Yellow Candles were lit on Wednesday night on the eve of Yom HaShoah – the annual Jewish remembrance day for victims of the Holocaust. The unique, informal education tool managed by Maccabi GB, enabled members of the community and beyond to remember those who lost their lives in the Shoah.